Michael Hold: An Adventure in Leisure

Our Sales Director Michael Hold has recently been interviewed by Hooked Up,  the first fully-online mobile leisure industry magazine delivering up to the minute frontline news, direct to your inbox.

Interview by Hooked Up - Published in Issue 20

Adventure Leisure Vehicles is based at Tebay in Cumbria, just between Kendal and Penrith. Its enthusiastic and passionate sales director Michael Hold has had a career in the leisure industry spanning five decades, and he can’t wait to see what the next 10 years will bring for the sector!

Michael’s career began in 1968 working for his father’s business, Dave Barron Caravans, with his brother David joining 10 years later. He sold his first new tourers; an A-line Super 10 for £359 and 10 shillings, and a Buccaneer Caribbean for £630; and has since sold the full gamut of leisure vehicles from tents to park homes.

His father Gordon Hold, now 93, is still in full health and Michael thinks he could still chair a dealership, but he is content watching industry events unfold from afar in Lytham St Annes, with his wife Annie.

Leaving the Barron group in 1999, Michael joined the Explorer Group as the marketing and design director where he spent 6 very happy years during which time he brought the Buccaneer brand to Consett, but also had the less desirable task of closing the failing Clermont Leisure dealer group which was then also owned by the Explorer Group. "You can't manufacture and retail at the same time," maintains Michael, "there's too much conflict."

It was during a trip to the RV Louisville show in Kentucky that Michael fell in love with Airstreams. “I wanted to be an architect when I was younger, and I think that Airstreams are a piece of architecture in themselves. They’re very cool and aesthetically beautiful, so they gave me my design fix.”

As a result, Michael and his business partner, chartered accountant David Rowell, decided to set up a company importing Airstream into Europe. Airstream Europe launched at the NEC in 2006 and the business grew over the years, adding [email protected] and Eriba Touring caravans to their range and eventually rebranding to Adventure Leisure Vehicles to reflect both the vehicles and lifestyle on offer. “I refer to them all as cool camping vehicles,” explains Michael, adding that he loves quirky vehicles that diverge from the mainstream, “Eriba and the [email protected] are very cool and very different. I like vehicles that don’t date or deteriorate or devalue. They’re my three big things, hence the vehicles that we have tend to follow that culture.”

Adventure Leisure Vehicles stopped selling new Airstreams in 2016 when the pound/dollar exchange rate made it unviable to continue, forcing them to close their Gloucestershire branch. The mantle of European importer for Airstream has now passed to Swift Group, but Adventure Leisure Vehicles still continues to service, repair and sell selected pre-loved European models.

The dealership has continued to grow over the years and now has around 100 vehicles on display; mostly from German manufacturers. “The Germans have a particularly good ability to engineer and design leisure vehicle products well. I like the German fit, finish and quality, just like their cars.”

In particular Michael has a soft spot for Eriba, “They are iconic too; they’re made with a steel frame and have a cult following themselves. We’re now in the top three for Eriba 'Pop Tops' in Europe, so we have really grown the brand over the last six or seven years.”

“Most of our customers are not established caravanners or motorhomers, and they love the German engineering and rightly expect good service.

“That said, we’d love to see more younger customers as we develop, so it’s great to see new models like the Eriba Rockabilly and Ocean Drive from Hymer, they will definitely appeal to a new audience who are design orientated”

He adds that whatever their age, people are being more adventurous, “They all want something to take on big adventures and road trips, and even do the Grand Tour of Europe.”

Closer to home, Adventure Leisure Vehicles hosts an annual rally for around 200 customers. “We put a big marquee up and have a hog roast and free bar and have a really great time. All of the staff have a weekend camping with our customers; it’s a fantastic way to celebrate the lifestyle that we all share.”

Weighing up a hybrid future

One of the areas of most concern for Michael is weights and sizes. “People want more and more equipment, yet electric vehicles and hybrids are not really geared up for towing yet. With the motorhomes, we haven’t seen any hybrid or electric motorhomes, but this is coming at us and hope the industry will cope.

“My next car will probably be a Mitsubishi PHEV, but it will only be able to tow 1500kgs, so there is a limitation, but with companies like Tesla driving the technology on, compatibility will come, and I hope I’m going to be around in another 20 years to see that full change.”

Despite his optimism he adds that he has yet to see any solid evidence of the industry make progress. “I hope there won’t be a dip as hybrid and electric cars hit the industry, but it’s going to be a big challenge over the next decade.

“Our friends in Germany, especially Hymer group and Knaus Tabbert are looking ahead and they are building much lighter vehicles like the Travelino, and hopefully, eventually, electric vehicles will complement tourers and motorhomes."

Looking to the future of the industry, Michael’s main prediction is further consolidation across all sectors. “Manufacturers are already consolidating, and I think that dealer groups will also become bigger and more effective” he says.

He acknowledges that as a result it is very possible that Adventure Leisure Vehicles could merge with or be acquired by a dealer group, an outcome that he insists would be positive. “It’s happening with manufacturers, it’s happening with suppliers, and it will happen with dealers and retailers, ” he says. “Economies of scale kick in and overall I think it will be positive.” He does sound a note of caution though; don’t forget about the customers.

“Customers still like that personal touch. I ran a very large dealership with 50 plus staff, and you can lose sight of the customers by being too big. At the moment Adventure Leisure Vehicles is exactly the right size with a staff of 14; they cope and the facilities we have are about optimum without going too big, although we do struggle in peak season when we are at full stretch.”

His future plans for the business include a larger, offsite service centre, and a bigger storage facility; both areas for which there is a strong demand in the North West.

The company is also making much greater use of technology – social media in particular has had a big impact and the business now has a full-time member of staff looking after its social media channels. As well as generating brand awareness, it also generates sales, “We have a really eclectic selection of vehicles, and so people do travel to visit us; a 300-mile trip is not out of the question for people because of the choice we have. We’ve just sold a Hymercar that we’re shipping out to the Falkland Islands.”

Michael concedes that there are certain cultural differences between how caravans and motorhomes are used by campers in the UK compared to mainland Europe, with the latter more inclined to spend all their leisure time outside and see the vehicle as simply a sleeping space, whereas the British are more likely to “want to sit inside and look at the rain.” Despite this he sees a lot of positive cross-fertilisation of ideas. Our interview is taking place in a Buccaneer, built, as Michael points out, by Elddis, which is now owned by the Erwin Hymer Group. “There’s a lot of collaboration happening between Hymer and Elddis in the UK, which will have a positive influence on vehicles on both sides of the Channel.”

This conversation naturally brings up the subject of Brexit. Michael is confident that it will not have any impact on the mechanics of importing European brands, “how we import our vehicles from Hymer and Knauss is seamless, it works very well, and we have a great service from both those companies. We’re used to bringing vehicles in, and exporting, we’ve done that for the last 12 years.”

He does have one worry though, “We’re just concerned that our prices for 2019, especially imported products from Germany, are just going to go up yet again beyond 5%, that’s a worry.”

“I don’t think the industry needs the NEC in February.” It’s a bold statement from a man who admits that there is more public interest than ever in the mobile leisure sector.

“Personally, I think the NEC should go to a 10-day show in October or early November with a two-day pass, because visitors need a few days to take it all in, one day just isn’t enough.

“I think manufacturers and dealers can manage one 10-day show more easily. When you consider the sheer cost of transport,  stand space and setting up, plus staff being away from their businesses. I don’t think we, as an industry, can afford it.

“We’re the only nation that has two per year; Germany, France, Holland, all just have one national show a year, in fact in Holland it is one every two years, so why do we need two a year?”

It’s not just his future in the industry that Michael is looking forward to; in September he will marry his fiancée Joanne. The pair will tie the knot in Kefalonia having met three years ago at the Caravan and Motorhome Show in Manchester.

A motorhome owner herself, Jo was introduced to Michael by a friend at the show and the two hit it off straight away. “It’s really exciting, Jo doesn’t have a background in caravans and motorhomes, but she loves them and has got more and more involved with working with me at shows. We understand each other’s worlds; we’re both very passionate about what we do. Our relationship is perfect; we're both very happy campers!”

After all this time, is there anything that Michael would still like to achieve in the caravan world? Of course there is. “I want to have a crack at the world speed record for towing and beat the Americans,” he says. It currently stands at just under 142mph and was set by Jason Sands in 2012. Michael just needs the right combination of vehicle, caravan, weather and location. “I’m on the case!” he says with a grin. And I don’t for one minute doubt it. 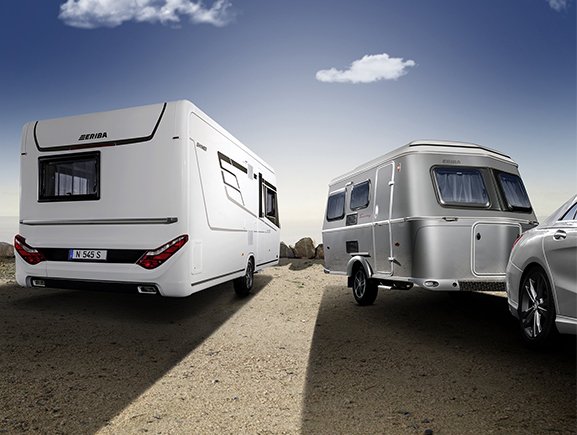 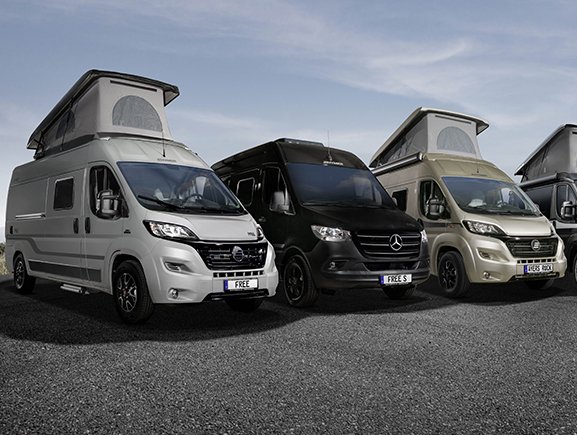 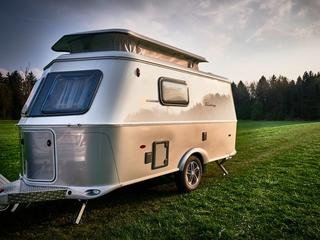 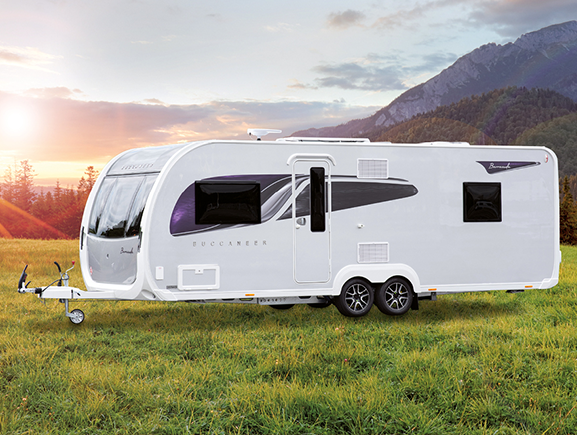 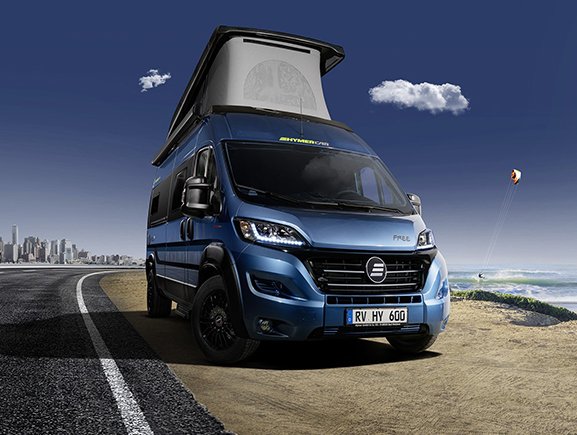